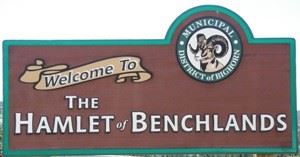 Benchlands, the only hamlet in the Ranchlands area, is located along Highway 40 and the north bank of the Ghost River. Benchlands was the original homestead of Guy Gibson, who served in the 31st Battalion during World War I. He chose the section as part of the program for returning First World War veterans because of its peacefulness and the beauty of the mountains.

Gibson raised funds by building log cabins for others and selling large lots on the three benches to Calgary residents. Guy Gibson died in the mid 1960s but his cabins grew and flourished on the benches of the Ghost River and many can still be seen today. The hamlet, which began developing in the mid-1930s is composed of large residential lots.

There is a volunteer fire department. The fire hall building houses the library and a meeting room (not available for private rentals).

The Benchlands Paperback Deposit is linked into the Marigold Library System. The library is located at the fire hall and works on an honor system with a volunteer librarian.

There is a lagoon near the Ghost River that is created through control of weir plates in a dyke area. This area was used for skating prior to the 2013 flood and may be repaired when the berm reconstruction area is reclaimed.

This community hall, available for rentals, is located south of Benchlands on Highway 40 in Rocky View County.